Find below an example of the fieldwork report, an excerpt from The Resistant City by Dr. Eunice Seng. 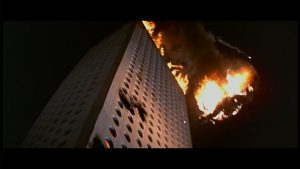 Utah jumps from the top of the fifty-two-story Jardine House and lands in the General Post Office. Scenes from the Shaw Brothers’ The Mighty Peking Man 1977, directed by Meng Hua Ho.

Shaw Brothers released The Mighty Peking Man in August 1977 (released in the US as Goliathon in 1980). The film retells the King Kong myth with Hong Kong as the signifier of modernity and urban civilization. Jardine House was the centerpiece.1 The film opens with the Main Building of the University of Hong Kong (1912), and the Students Union Building (1952) (demolished in 1986) in the background.2 The pre-war colonial neoclassical architecture and the postwar international-style building captured in a single frame signifies the coexistence of traditional and modern, a trope that is sustained throughout the film. The characters travel from Hong Kong to the Himalayan Mountains through a modernizing Bangalore and back to Hong Kong’s Central District, with its gleaming skyline of concrete high-rise office buildings.

Captured and subdued, the giant ape named Utam arrives in Hong Kong’s modern Victoria Harbour. On the Kowloon side is the colonial neo-classical Kowloon-Canton Railway station (KCR), soon demolished to give way to the Cultural Centre in 1978. Across the harbor on the Hong Kong side, high-rise office buildings define the Central District. The oldest of these date back to the late 1950s. Jardine House stands as the newest and tallest. No one is more critical than Ackbar Abbas who describes Hong Kong’s representation of itself as a simultaneous disappearance and reappearance. For Abbas, the representation of Hong Kong as an East-West city, promoted by the Tourist Association through the image of the Chinese junk against a backdrop of tall modernistic buildings, is an example of how such a narrative, which has since been the dominant discourse on Hong Kong, “manages to make a complex space disappear into a one-dimensional image, structured on a facile binarism.”3

That “one-dimensional” image of modernity is the leitmotif of The Mighty Peking Man. Most of King Kong takes place at night where downtown Manhattan is in silhouette. The twin towers were presented as sinister towering figures resembling Kong’s mountainous island in the Indian Ocean. In The Mighty Peking Man, Jardine House is presented amidst Hong Kong’s skyline in broad daylight. The building is introduced by the protagonist for its “fantastic views”, the city skyline as a “new home” for the giant ape and his female companion. Earlier, in the Himalayan jungle, the temple the Utam destroys exposes a concrete structural frame. The irony of this seems to escape the producers as Utam’s trek across the “concrete jungle” of Hong Kong unfolds an architectural and infrastructural odyssey defined by nondescript concrete high-rise buildings, roads and highways that he encounters, culminating in Jardine House. 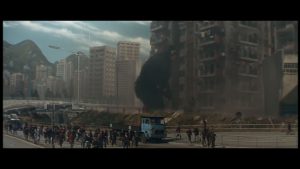 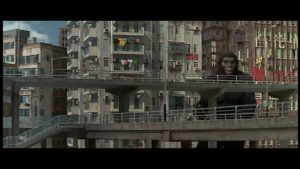 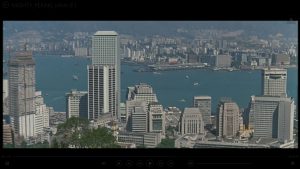 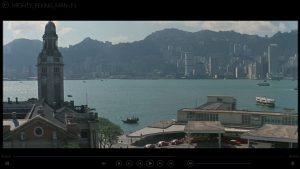 1 Produced by the Shaw Brothers Studio at an estimated cost of HK$6 million (meagre compared to the HK$120 million Hollywood version), the film was directed by Ho Meng Hua and starred Hong Kong actor Danny Lee and Swiss actress Evelyne Kraft. It was written by Chinese science fiction and martial arts fantasy writer Ni Kuang. It was released in the United States as Goliathon in 1980 and re-released by Quentin Tarantino’s Rolling Thunder Pictures in 1999.

2 The buildings are designed by Leigh & Orange, and Wong and Tung respectively.