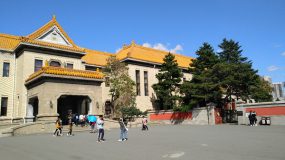 To highly restore history, the movie filmed the real Imperial Palace of Manchu State instead of creating a replica. Even though the building in the film is precisely the one in reality, it provides the audience with a completely different feeling. One can still feel how splendid the palace is when visiting the museum. In particular, when the entire palace is immersed in the sunlight, the “yellow,” which symbolizes royalty of the emperor is glaring and glorious. Nevertheless, in the film, the rooms inside the palace are either extremely dim or full of the light of blue and purple. As the light is faint, there are many shadows around the room, highlighting the gloomy atmosphere. Besides, Tong De Hall, the building where Pu Yi was lived, is surrounded by ash and dust. The “yellow” of the building, both inside and outside, is very dark and lost of gloss. It is nearly impossible to realize this is the emperor’s palace, who is supposed to be the most powerful man in his country.

The reasons why Bernardo Bertolucci filmed the Imperial Palace of Manchu State in this particular way deserve more profound discussion. First of all, the palace covered by dust implies that Pu Yi is not a real emperor anymore. In other words, a ‘fake’ emperor does not deserve to live in a magnificent palace. He does not have any power. The Japanese fully control Pu Yi, being forced to obey every instruction. Apart from ash outside the palace, the dim light filling inside the building indicates Pu Yi’s confusion during this period. Before he came to Manchukuo, he believed he could reobtain the power of an emperor and rule this new country on his own. However, as the Japanese gradually control him, it becomes hard for him to see his present situation and future. While those changes in the architecture focus on portraying the image of Pu Yi, scenes full of the color of blue and purple magnify the blue emotion and loneliness of Pu Yi’s wife. She is a well-educated and intelligent woman. Observing that his husband is merely a puppet of the Japanese, she is entirely disappointed for what his husband has become, a betrayer of his own country. Unfortunately, his husband is unable to understand her. To conclude, how the Imperial Palace of Manchu State is presented in the film better reveals characters’ emotions and complicated circumstances. 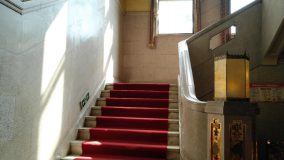 [Left: Pu Yi’s wife goes downstairs alone to attend a party. Scenes from THE LAST EMPEROR(1987), directed by Bernardo Bertolucci; Right: the photo of the stairs in Palace Museum of the Manchurian Regime now]

[Pu Yi’s wife at the party. The party aims to celebrate Pu Yi’s coronation in Manchukuo. Scenes from THE LAST EMPEROR(1987), directed by Bernardo Bertolucci]

1 The Last Emperor is a biopic film co-produced by the Italian Yanco Film Company, British Daoao Film Company, and China Film Co-production Company.  The film was directed by Bernardo Bertolucci and starred Zun Long, Chen Chong, Wu Junmei, and Peter Otto. It was released in Italy on October 23, 1987, and its 3D restored version was shown at the Shanghai International Film Festival in China in June 2015.

2 The Imperial Palace of Manchu State now becomes the Palace Museum of the Manchurian Regime. On March 9, 1932, under the support of the Japanese invaders, Puyi began to rule Manchukuo. On April 3, 1932, Puyi moved here, and this place became the “Manchukuo government.” In 1934, Manchukuo introduced the monarchy, and “Manchukuo” was changed to “Manchuria Empire.” On March 1, 1934, Pu Yi held coronation in the Qin Min building, and then “ruling” was reversed to “emperor,” “government” then changed to “palace.” Since then, the Manchu Emperor palace was expanded on a large scale.